Should Women Be More Worried About The Glass Cliff Than The Glass Ceiling?

By knowing that the glass cliff exists, we can not only avoid falling off it, but climb above it.

As women, we shouldn’t solely strive to shatter the glass ceiling. We must also avoid tumbling down the glass cliff. What’s the glass cliff, you ask? British comedian Sandi Toksvig explained it best: ‘It’s a case of men going, ‘Wow, it can’t get any worse, quick, let’s put a woman in charge!’

In other words: we ask women to save drowning companies and compare them to men who lead steady ones. It’s a downward spiral. When women can’t magically save struggling companies, society reaffirms their belief that women can’t lead and it’s best to have white, male CEOs in charge. This isn’t an exaggeration: in a 15-year study, researchers found that a female CEO succeeded another female CEO in only four of the 608 transitions at Fortune 500 companies. [And while no similar study exists in the public sector, as with other comparisons, this is likely true for local government women as well.]

For example, many critics claim Marissa Mayer was a victim of the glass cliff. After becoming Yahoo’s sixth CEO in a five year period, she inherited an under-performing company and faced mounting pressure to turn it around. After Mayer failed to make Yahoo relevant against Google and Facebook, she resigned and critics saw it as a reflection of her effort instead of her environment. Lo and behold, Yahoo appointed Thomas McInerney to replace Mayer as CEO. 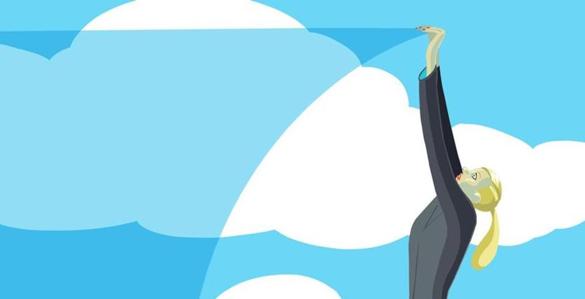 The ‘glass cliff effect’ has gotten so bad that new research from the University of Missouri reveals that investors are more likely to target female CEOs and buy shares of their companies with an intent to direct management decisions. “These findings lend more credence to the idea that women are treated differently than men when they are given leadership positions,” said University of Missouri Professor Daniel Turban, who authored the research paper. So what does that mean for you? And how can we change the tides of gender bias? Now that we understand the glass cliff, I want to share three tips on how avoid it from Talia Bensoussan, previously a head recruiter at Target.

Saying no can be the ultimate form of self-respect. It’s a way to guard yourself against opportunities that seem super, but may soon sour. Half the battle of success is how you set yourself up. If you take a job that asks you to accomplish the impossible, you might do it. Or you might fall off the glass cliff. That’s what many female tech executives did in rejecting the offer to become Uber’s CEO in 2017. With a $40+ billion valuation, Uber seemed like a career catapult for any leader. With sexual allegations and security breaches, Uber was perhaps another glass cliff waiting to happen. This may be one of the many reasons female leaders turned down the position, including Facebook COO Sheryl Sandberg and YouTube CEO Susan Wojcicki.

2. Define Success Before You Take The Job

If you’re going to take the job, make sure you do it on your terms. When you’re recruited, remember that you have leverage. That doesn’t just mean negotiating a higher base salary and